“As the natural world ticks along its endless cycle of birth, growth, and death, there is much to celebrate, much to commemorate, and much to be superstitious about. The Brits have had a long time to work up their own unique reactions to these moments, and their customs and traditions can loosely be split into two subjective categories: those I grew up with and understand (and are therefore Not Weird) and those I do not recognize and do not understand (and are therefore Weird). Of course, if you’re not from around here, they’re all weird.”

Back catalogue: Anglophenia: Five Birth Traditions of the British Isles (Some Of Which Are Disgusting)

Anglophenia: 10 British Ways to Ring in the New Year

Anglophenia: The Brit List: Five British Holidays Americans May Not Know About

Anglophenia: Five British Things You Must Do On May Day

Anglophenia: May Day: The Hills Are Alight With the Fire of Beltane 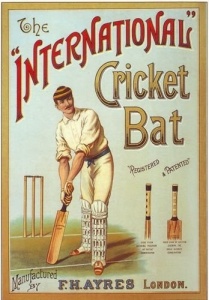 “I have argued with ardent cricket fans about whether the sport they love so well, with its arcane wisdoms, long-standing traditions, and infinite subtleties, should be considered less a sport and more an art form. To which the only sensible answer is no, stop being silly, it’s a sport.”