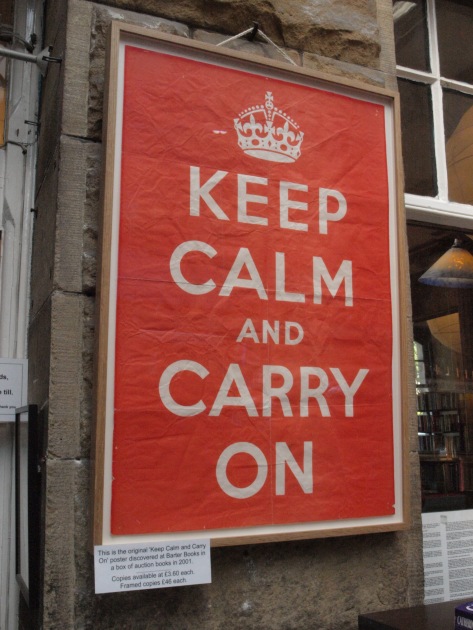 “In spring of 1939, a few months before the outbreak of the Second World War, the British government commissioned a special poster, knowing that dark times were ahead. The slogan “Keep Calm and Carry On” appeared in white on a regal red background, set in a specially commissioned typeface to prevent forgery and with a Tudor crown above. The intention was to put the posters up in areas where German bombers would do the most damage, in order to encourage the population not to lose heart. But despite printing around two and a half million copies, the British government kept them in storage, caught between a concern that the slogan would be taken as patronizing — or even frustratingly obvious — and waiting for a moment of sufficiently dire need, such as a full invasion. This never transpired, and so the posters were eventually destroyed, apart from a few exceptions.”

Back catalogue: Anglophenia: Iconic British Things No. 8: A Brief History Of Keep Calm And Carry On

UK Business Insider: The Surprising History of Keep Calm and Carry On